Itching is a common allergy symptom in cats and often manifests into other symptoms initiated by a variety of environmental, household, and food triggers. Environmental allergies are caused by allergens such as pollen due to seasonal and climate changes. These factors not only worsen the allergy, they also cause the allergens to fester in cases such as flea bites. Symptoms include sneezing, vomiting, red or scaly skin, hair loss, itchy or runny eyes, snoring caused by an inflamed throat, swollen paws, and constant licking.

The Biological Mechanisms Behind Cat Allergies

When a cat is exposed to an allergen, their body activates mast cells and basophils, which release a variety of chemical mediators responsible for initiating multiple impulses such as itching. These chemical mediators are diverse and include histamine, interleukins and prostaglandins (A. Adkis & Akdis, 2011). When these mediators are expelled, they influence protein expression which stimulates the nerve cells resulting in itching. Major areas of inflammation include the thighs, lower back, neck and head and the inflamed area usually appears as a reddish, crusty rash.

The most common allergens are environmental, such as pollens, grasses, weeds, danders and molds. Other prevalent allergens are insects, parasites, fleas and mites, as well as common household cleaners, detergents and perfumes (Hensel et al., 2015). Additionally, food can be highly allergenic — accounting for 10-20% of all feline allergy cases. (Hill, 1999). Food allergies usually present themselves throughout the year as most cat owners rarely change their pet’s food type However, non-food allergies tend to be cyclical and often depend on the season or climate. For example, allergies to pollens usually manifest themselves during the spring, when pollen counts are high, and flea allergies are very common in warmer climates with lower elevations (Hensel et al., 2015). 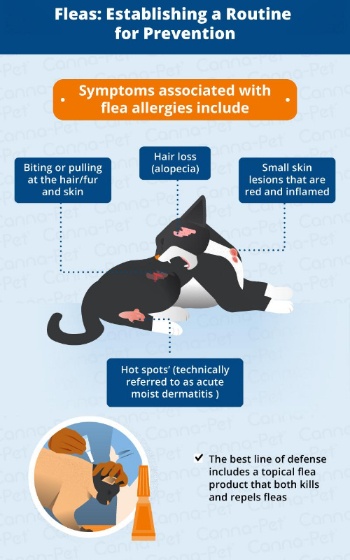 The term allergy is used to define an adverse immunological reaction to one or more allergens and is synonymous to hypersensitivity. Allergies can present with many different symptoms and there are a variety of triggers, from environmental to household to food. Climate and seasons can play a key role in allergies, with flea allergy dermatitis being a common example. Identifying and addressing allergy symptoms in your cat can prevent further complications and improve their quality of life.

Photo by Ekaterina Kuznetsova on Unsplash